Visual artists are a vital part of Kentucky’s Queer community. Thanks to the Great Meadows Foundation, which was launched in 2016 by contemporary art collector and philanthropist Al Shands (1928-2021) in order to critically strengthen and support visual art in Kentucky, Queer Kentucky will be featuring interviews with a number of these artists.

Brennen Cabrera is a grunge LGBTQIA+ artist, whose explorations of the sexual and macabre reflect gritty reality and horror: he is a Sagittarius, denoted as being one of the more sexual, impassioned signs aligned with fire, and the subversive nature of his birth timing is reflected in his subversive works. For this feature, we will explore both artist and his current work.

At the age of three, Brennen began using artistic mediums and sketch drawing to express himself, a communication tool as well as an emotional outlet that aided and enriched his navigation of socialization. Progressing with drawing for some time, his experience with painting came later — being born into a religious family, he spent most of his time in the church they attended and its variety of programs, painting with an elder in the church and stopping after they passed. It wasn’t until the death of a church member’s mother that Brennen resumed. He was gifted with the paints of this recently deceased and he would use these paints to greater explore their practice.

The subject matter of his work is so intense to his audience but also himself: it is humanism he embraces. Frequently, Brennen paints to express both empathy and dissatisfaction with the world. Lightheartedness was never familiar to him. Unless we consider the sexual aspect of some of his work. In regards to the sex, he had this to say:

“Treat your artistic practice like your hot mess partner. They’re beautiful, you love them and they’re also scary. And you really want to fuck them.” He believes that every artist needs to learn to “fuck” their art to understand their practice. To explore it not just in function, but sensation. Focusing on the aspects of human connection allows him to create something intimate and surreal. The body, he believes, is a part of knowing someone. The personal bond created during sex is a thing of beauty that encompasses all feelings. Thusly, it is a perfect way to put it.

With his own work, he explores human bodies, desire, intimacy, and sex. The things that could not be navigated by himself are replicated in his works, precious moments of connectivity, sentiment, and carnal pleasure.

Brennen himself is a transgressive artist. Rough canvas, holes, dirt, muted tones, and sometimes found materials are utilized. He carries these motifs also through his usage of blood colors and the blood-coated anatomical insides made visible so frequently in his mixed media work. Reflecting on the many forms of violence seen and unseen in the world we live in could also question feelings for our internal anatomy, internal function, and internal emotion. 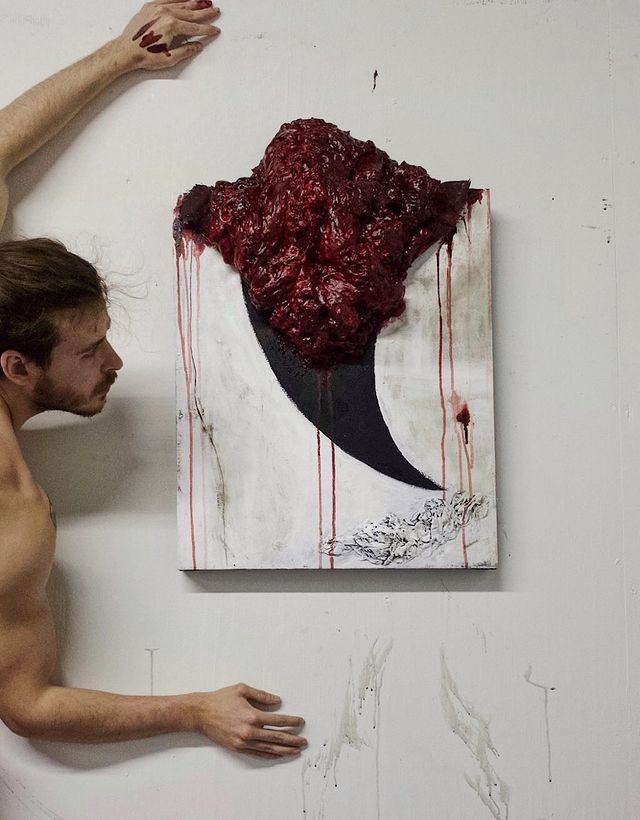 Wanting to always open his art to interpretation, he is used to the title of a “dark artist”, or someone who traverses into “horror.” Believing that there’s more to horror than blood and gore: these aspects are not just horrific, but human. Blood colors and viscera elicit internalized responses. We feel a lot of things internally that much of the time no one sees. Conveying this is important to him. “Life is guts. Life is blood.” It says a lot and it’s also seen in his transgressive elements of self-harm, (which he does not advocate!!!) he is not afraid of pushing the limits of mutilative artwork.

Branching out into performance art, he dives into transgressive practices, creating alternative performance art through “Dimitri”, an alternative self influenced by past trauma. An example of this identity at work was in a recent performance titled “Come To Church.” This performance art piece utilized nudity, violence, confession, and over-stimulatory scenery. Inspired by his own autistic meltdowns and past and current experiences with ableism, he created what he describes as a “relentless confessional mess”, but not one he was disappointed by. He wishes to take performance art more seriously, believing more artists should consider using their body as their own mediums. (But he still doesn’t recommend going as far as hurting yourself too much.)

In a world that experiences many forms of violence, we are forced to acclimate, and to continue this endurance inflicts unwanted pain. Conveying this pain through art could be symbolic of that struggle society faces but also denies it.

He believes queerness was what set his art free — it allowed him to explore his sexuality, differences, and acceptance. Through this, he formed himself as an artist. In person, Brennen is autistic and open about his identity. He is kind, quiet at times, and strong in his speech when absolutely necessary.

“If you have something serious you need to express, do it. I think artists should address more provocative subjects. Those works make us think more.” 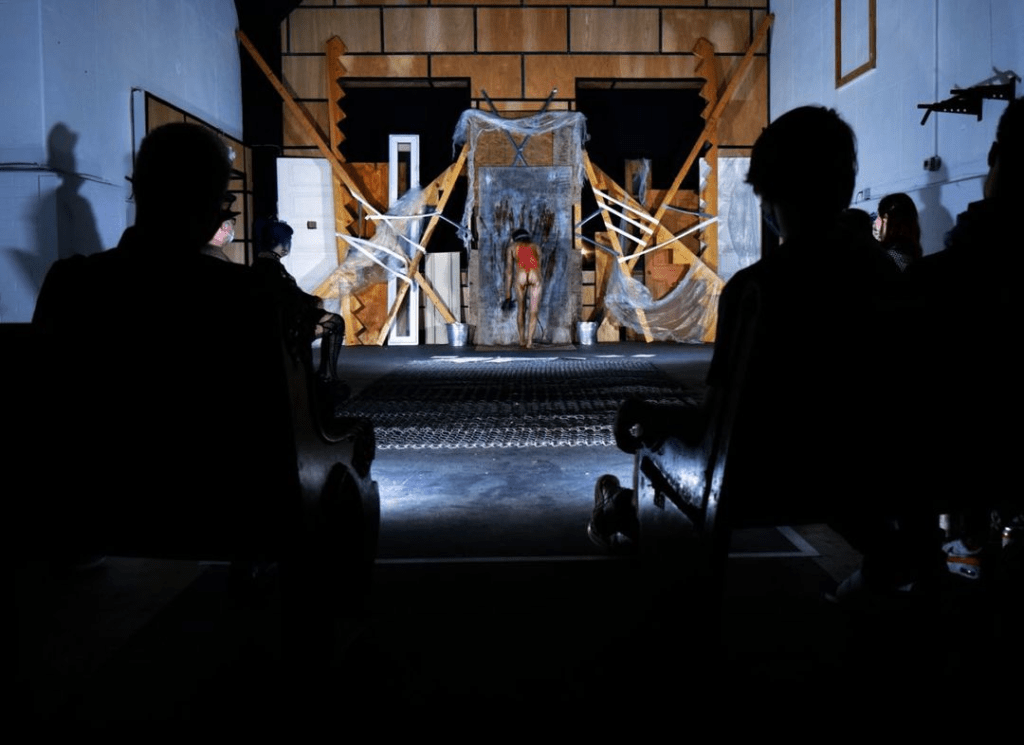 Photographed by Bill French, Documentation Photograph from Come To Church, 2022

Relics from “Come to Church” (are previous cumulative work) are on display now at Surface Noise, located at 600 Baxter Ave, Louisville, KY 40204.“Window Rooms are not Vacant” show pieces are included, but most of the pieces were made new. Declining deeper into society’s ableism, he dwells on the sensitive natures of emotion and trauma. Additionally, there are glimpses into queer identity and eroticism. Grungy, at times grotesque aesthetics, amorphous geology, and overstimulating methods of confession are sure to surprise the eyes.

Crossing Borders and Intersecting Identities: The Story of a Queer Immigrant